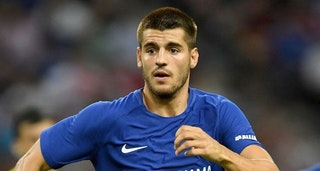 Alvaro Morata is in the safe hands of eminent German doctor Peter Wehling
Antonio Conte does not know when striker Alvaro Morata will be fit to return to football action, but he is in the safe hands of well-known doctor Peter Wehling. Morata has paid two visits to his clinic in Dusseldorf and in the coming days he will have his third and final session to try to solve the problem and return to the field. According to MARCA, the Spaniard seems to have overcome his back problem with the help of the doctor, an injury he has been dealing with since mid-December. In all his visits to Dr. Wehling, the striker was accompanied by Chelsea’s physio and doctor. World-class athletes such as basketball players Kobe Bryan and Tracy McGrady, as well as a multitude of teams from all North American professional sports, European football clubs, tennis and golf players have visited the Cemor clinic. It is considered one of the best medical clinics in the sports world. Morata started to first feel some discomfort in the second week of December, which resulted in him missing out on the game against Huddersfield Town. Since then, his pain continued, despite having played in several matches for the Blues. In the last ten matches of the English Premier League, the former Real Madrid man has been sidelined for five of them, and since January 17th, he has not played a single game. The Chelsea boss has acknowledged that his back problems are yet to disappear, but his presence in the first leg of the knockout stages of the Champions League on February 20 will not be ruled out. Morata has appeared in 31 official matches with Chelsea so far this season, scoring 12 goals, and the player will be hoping he can return in time for the highly anticipated clash against Barcelona.